Taking advantage of the area on his rooftop, the young man raised this animal, helping him to earn 100-200 million VND/month.
Events: Economy Overview
In 2017, after finishing high school, instead of pursuing a university path like many others, Nguyen Huu Thang (residing in District 6, Ho Chi Minh City) pursued his passion for ornamental fish and started a business.

Starting to raise fish when he was in 11th grade, Thang started going online to learn about how to raise and take care of fish. On the groups, the student that year saw a lot of people exchanging and buying, he also came up with the idea of ​​trading ornamental fish.

Knowing that he had this intention, his parents objected, partly because of fear of affecting his studies, partly because he was afraid that he would spend too much money on fish and did not have a stable job, moreover, there was no money in the family. Who is interested in fish farming? Thang had to find a way to convince his parents, taking his savings to buy 10 more goldfish and giving his money to his friends, asking them to pretend to be guests to buy fish. 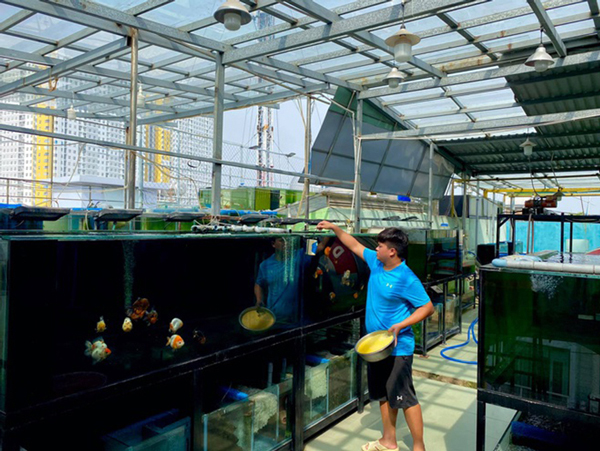 Thang built about 20 fish tanks on his rooftop.

After 3 months, his parents also changed their views and no longer objected. However, all costs of eating, taking care of or buying fish, Thang has to take care of himself. He decided to do real business, but he didn't have much money, only a few hundred thousand dong, he started planning to spend all that money to buy fish and then sell it. After only a few months, he had up to 5 million dong, including principal and interest.

Finishing high school, the young man invested and expanded more in the business. He spent time, effort and money to go to Thailand to learn how to raise ornamental fish. Thanks to this trip, Thang realized that natural light is an important factor for fish to have the best color. 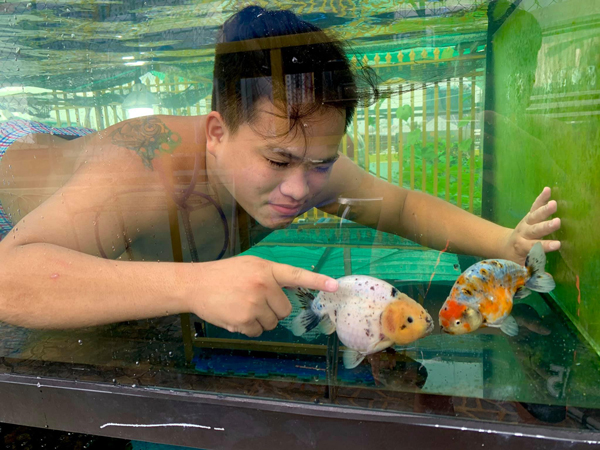 Every day, he gets up at 6 am to feed the fish and take care of him until about 19 pm.

Seeing that, when he returned home, he used the roof of his house to build a small fish tank to try. After a month, the fishes grow, develop well, beautiful colors help Thang sell twice as much profit as the original, some eye-catching colors sell for 3-4 times higher. Realizing the potential of raising fish on the terrace, he discussed with his father to build a series of aquariums on the terrace, but continued to receive objections because he was afraid of house collapse, leakage ...

Again trying to convince, after 1 year, his father also agreed to let his son build an aquarium on the roof.

Recalling the time when he started raising fish, Thang recalled when he recounted that time he encountered many difficulties. Not only about his family's objection, but his basic knowledge of fish farming was not much, so he had a difficult time raising fish. 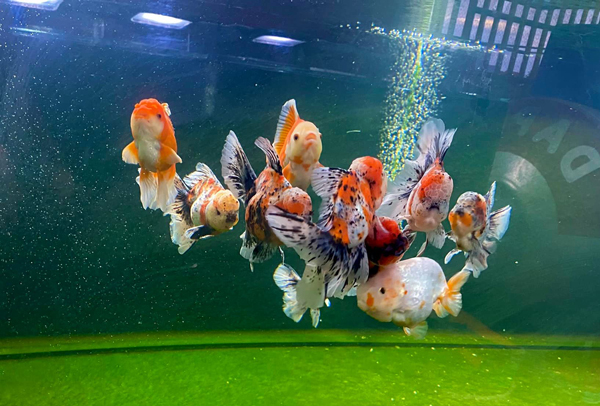 In the times of raising fish, there was a time when he sold a mutant fish for up to 35 million VND.

Once, a young man imported 60 fish for tens of millions of dong, but when he got home, half of the fish died due to the transportation process. There was also a time when the fish got sick, did not catch up, causing the entire aquarium to die. Not to mention the times that Thang dipped his hand into the sick fish tank to another tank, causing other fish to infect and die.

Those were all lessons learned for him in the first years of his life when he started raising fish. Up to now, Thang's knowledge of goldfish farming is well-known in the aquarium world in Vietnam. 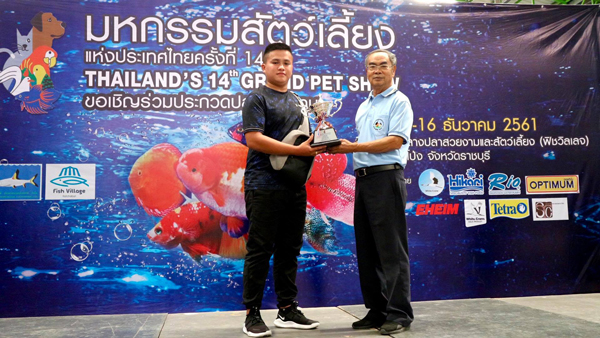 Won many competitions in the country and abroad about ornamental fish, won 8 first prizes.

Currently, he owns 20 aquariums on his rooftop with a revenue of about 100-200 million VND/month. To get this income, he has to start working with fish every day from 6 am and finish around 19 pm. There were days when there was a problem, he had to work until the night.

According to Thang, when raising goldfish, farmers need to learn and learn in advance the basic knowledge when raising fish and the most important thing is that players must create the best living environment for the fish to grow well and grow. Additional attention should be paid to light and temperature.

He also intends in the future to help people who have a hobby of keeping ornamental fish know about this goldfish more. As for the expansion, Thang plans to invest in more facilities to increase the number of farmers and hopes to open a shop specializing in goldfish business for customers who do not know him through social networks. will be easier to access.